The name of the breed earlier known as Jack Russell Terrier was altered to the Parson Russell Terrier. Jack Russells has long been favored by horse owners. However, this kind of terrier frequently has a long body and short legs. Word „Parson“ was used to describe  Jack Russell terriers with longer legs. Over the time this has become common name which eventually led to recognition of a new breed of terrier.

The promoter of this breed, John (Jack) Russell, was born in 1795 in Dartmouth, Devon. Reverend John Russell was a great hunter and horse rider, and has spent a lot of time breeding terriers.

While studying in Oxford he bought his first terrier, female, wire-haired with white markings on the head. Breeding goal has always been a working ability of the dog and the typical picture of the breed was usually put aside. This tradition was followed in the past by the cross breeding of Jack Russell terrier and other terrier breeds. 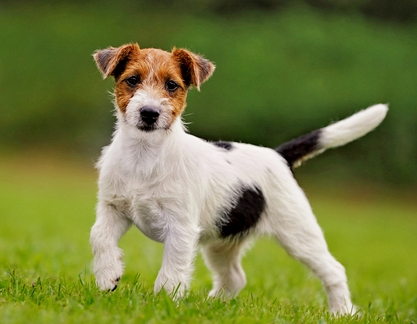 Other dog breeds were also crossbred, but with a very little success, mainly because they didn’t fit the Jack Russell terrier type. The Parson is slightly taller than it is long. Its long legs enable it to keep up with the horses and hounds during a fox hunt. Its slender build allows it to fit into smaller passages in chase of its quarry.

This breed has become popular on european continent after World War II, especially with hunters and horsemen. The Kennel Club UK first recognized Parson Russell Terrier on 9th  January 1990. The breed was recognized by the FCI 2nd July 1990 under the name "Parson Jack Russell Terrier".

Parson Russell Terrier’s height varies between 31 - 36 cm (12 - 14 inches) with weight between 6 - 8 kg (14 - 18 pounds) . Head is strong and in a good proportion with the rest of the body, so the appearance of balance is maintained. The muzzle is strong and rectangular. The stop is quite defined but not too prominent. The nose is black. Moderate sized eyes are almond-shaped, have dark or pink rims. The V-shaped drop ears fold forward and point toward the eyes. The teeth meet in a scissors bite.

Important to this breed type is its natural look: harsh, waterproof coat with a compact construction and clean silhouette. The coat is smooth or broken. He has a small, flexible chest that enable him to pursue his prey underground and enough leg length to track the hounds.

The Parson is an intelligent and brave dog with a lot of energy. They’re perfect family dogs, but it has to be taken into consideration that young children shouldn’t disturb them too much.

Because of their origin, terriers have some troubles socializing with other small pets. However, if they’re accustomed to each other from an early age, then it is quite a good experience.
If they are left alone for a longer period of time, make sure they have something to chew/bite otherwise they’ll just dig in the yard and cause some unnecessary damage.

Comb and brush your terrier at least once a week. Bathing can be done from time to time, basically only when needed. Grooming Parson Russell Terrier can be a nice experience if your dog is accustomed to it from an early age.

Nails should be cut regularly if you want to avoid overgrowth and cracking. Due to their position, their ears need to be checked for dirt and any signs of an ear infection.