The Wire Fox Terrier is a dog breed that originated in England and was built combining the working terrier of Wales, Derbyshire, and Durham. At the first crossing of terriers there was an intention to create a breed that will be capable to chase foxes into their underground burrows.

Although they were present at the royal court, the breed was not acknowledged as a family dog until the 1930s, when the popularity of the terrier breed grew by appearing in "The Thin Man" series. In "The Adventures of Tintin" comic, the same time as series "The Thin Man", also had a Wire Fox Terrier as a constant companion of the main character.

The wire fox terrier is short-backed and square-proportioned. It could be described as a combination of speed, power and endurance, allowing it to  stay near the horses and hounds during the hunt and to follow a fox into narrow burrows. 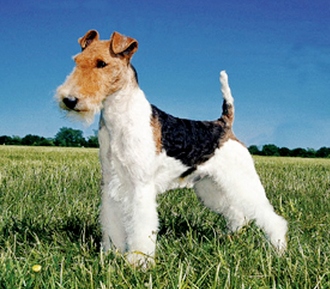 The skull is flat, narrows moderately to the eyes.  The muzzle gradually tapers to the black nose. The stop is slight. The teeth should meet in a scissors bite. The small, V-shaped ears drop forward close to the cheeks. The eyes and eye rims are dark in colour. The neck is thick and muscular. The legs have to be straight.

The wiry coat is dense, with a tendency to twist, similar to the hair on the outside of a coconut matting. The hairs are so thick and close together that when they are parted, you cannot see the skin. It has a short, soft undercoat. The colour of the wire fox terrier coat is predominating white with black or brown patches.

Fox Terriers are courageous, fearless, faithful dogs who love to be outdoors, and this is the result of many years of selection for the needs of their “job” as an assistant in fox hunting. Forcing foxes from their dens out into the open where Fox hounds and hunters then took over. Their small size allows them to go into the fox lairs, and their long legs helped them keep up with the hounds.

Today, Wire Fox Terriers still like running and digging outdoor and are happy to be in the company of kids of all ages. They are very active dogs who look for a family who enjoys having fun and active vacation, but for seasoned owners as well, these terriers are a good choice for a pet.

Wire Fox Terrier grooming should start very early because the dog will need to accept someone working on his coat often. When they come from a good breeder, Wire Fox Terrier puppies will have been trained on that, before they are ready to go to a new owner. 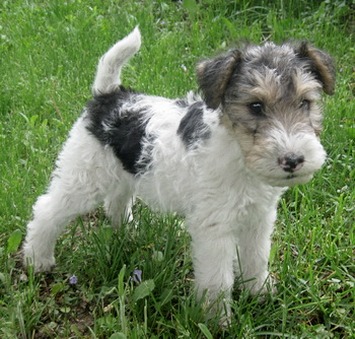 When you get that new puppy, you must start with the brushing and combing right away. It would be desirable to take him to a good groomer when it is 3 months old. There may be problems when grooming, if a dog is not accustomed to the groomer, and already at the age of 6 months or a year. This can be a significant problem if the Wire Fox Terrier has been rescued before you get it, because we do not know whether in the previous period his coat was groomed or not.

When you bring Wire Fox Terrier to the groomers, do not leave it alone there because the dog can feel unsafe. In this case it can be nervous and so acquire hostile attitude toward grooming. In some cases, "grooming phobic" may occur and that is an undesirable situation.