Imagine a dog small enough that you can pack in your backpack, a true terrier to the core of its being, courageous, brave, friendly, intelligent, exuberant, confident. True hunter that is also a good house dog and well behaved with children. And then you have picture of Lakeland Terrier.

Layman often mixed Lakeland Terrier with Airedale Terrier and would often think that it is a young dog who has yet to grow up. The reason for the mix up comes from the similar way these two terriers coat types are groomed. 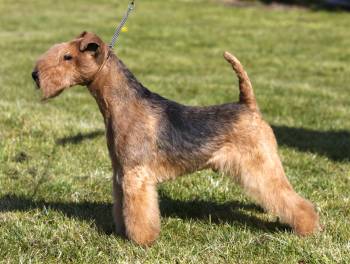 Lakeland Terrier named Rogerholme Recruit was the first great champion. He won Best in Show at the Crufts dog show England in 1963.

Lakeland weighs on average 7–8 kg (15-17 lb) and is the smallest of the long legged terriers. Lakeland Terriers grow to between 13 to 15 inches (33 and 38 cm) in height measured to the withers. Has a broad muzzle, but not too long. The nose has to be black. Eye color dark or hazel. Slanting eyes are undesirable.

The Lakeland terrier has a thick, harsh wiry outer coat and a soft undercoat. They come in variety of  recognized  colours.

FCI (Fédération Cynologique Internationale) has a similar list of recognized colours for this terrier breed: black and tan, blue and tan, wheaten, red, red grizzle, blue, liver or black. Small spots of white on feet and chest are undesirable, but allowed. Atypical colors are mahogany or deep tan.

The typical Lakeland is not as boisterous as some terriers. However, there's enough of hunting instinct in him. He loves being animated and exercise outdoors. Owners of the Lakeland Terrier have to be active, confident and consistent, because they’re known for their pronounced independent streak.

The Lakeland Terrier, who  is from an early age used to other pets and socialized with other dogs, will not have any problems with bahavior even when he grows up. Training him should be firm and consistent, with plenty of activities

Devote 20 to 30 minutes a week to brush and comb your dog. Then give him a rubdown with a towel to remove any filth and excess body oils. If you do this regularly, it won’t be necesary to bathe him often. Remove any loose hair from the ears and trim excess hair among the pads of the feet.

With the exception of the specific fall of hair between the eyes, the Lakeland terrier is groomed like a Wire Fox Terrier. Regardless of the way, clippered or hand stripped, the breed's grooming should leave little coat covering the contours of its body.

If your groomer clips your Lakeland Terrier correctly, then he will have spiffy look that is consistent with the breed standard. If the dog is competing at the show it can be of the great importance, and if not competing, he will certainly have a nice look.