Welsh Terrier is originally from the northern parts of  Wales. This breed is undoubtedly a descendant of the Fox Terrier and an old English Terrier called Black and Tan.

Welsh Terrier is bold, strong and persistent small game hunter, also involved in chases. Outgoing, lively and not quarrelsome. Remarkably shy, gentle and obedient. Welsh Terrier looks like a small version of Airedale terrier, and in Western Europe is increasingly prized like dog for mingling. 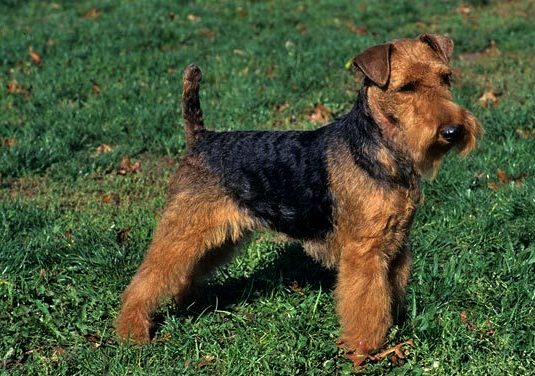 The Welsh terrier most likely descended from the old black and tan coarse terrier that was popular in the UK. By the late 1700s, a distinctive strain — known as Ynysfor — was running with otterhounds in North Wales. At the same time, a similar breed, the "Old English broken haired" terrier, was bred in the northern UK. Needless to say, these two types of terriers were so similar that they were able to compete together in the same class at the first shows.

The Welsh Terrier body form is rectangular, with an extended, "brick like" head. This shape is formed by the whiskers and beard. This breed is colored tan on the head, legs and underbelly while having a black or grizzle saddle. This is not always the case with female terriers as they are sometimes a simple darker tan all over.

The Welshie is a strong and compacted dog of medium size that can grow up to 39 cm (15.5 in) with a weight of 9.1-10.0 kg (20-22 pounds). With pedigree, the face can take a more oval shape and be finer boned and more distinct. The coat contains two layers, one is an undercoat that insulates and second is sharp fur on top. Welsh Terriers puppies are born mostly all black, but during the second year they change color to black and standard tan grizzle.

Welshie is a high-energy dog like most terriers. Even with a lot of exercise, you should expect occasional running around the house or yard. He should have at least one hour of exercise a day. That can be aacomplished by playing with the dog in a yard or park, or going for a long walk.

Welsh Terrier is a loving dog who can be patient when he needs to be. That patience is best shown when in the company of children, which just proves he is a good buddy with children. The Welsh Terrier breeders pay a lot of attention to the socialization with other dogs, which as a result significantly alleviates all activities with them when they grow up.

Welshie grooming starts with regular brushing. It’s recommended to be done at least twice a week, even better if done three times per week. Run a pin or slicker brush down him to remove all the dead, loose hair from the coat.

Bathe your terrier only when he needs it. The Welshie's tough, waterproof coat doesn’t allow dirt to stick, so baths are often not needed. Wash him only if he’s particularly greasy or has rolled in something nasty. In that case, use a gentle dog shampoo and rinse him thoroughly. Use towels to dry him.

Welsh Terrier should strip his coat three times during the year. Welshie doesn’t shed in the traditional sense, but it is still necessary to regularly remove dead hair. This will allow the growth of  the new one.

Plucked out his coat by hand or simply remove it by using stripping knives. You can do this by yourself, but it would be best to seek an advice and instructions from a professional groomer first, to learn how to do it properly and without hurting your Welshie.

Check his nails every so often and cut them if they are too long. If dog spends a lot of time playing outside, that may not be necessary. Ask a groomer or your veterinarian to demonstrate how to trim the nails without an incident.

Trim your Welshie’s unkempt coat. Your dog’s sweet little whiskers can get into his food and become caked with leftovers. Use scissors or dog hair clippers to trim his mustache hair properly. The hair between the pads on his paws can also collect debris and mat, causing him discomfort. Trim it even between the pads.